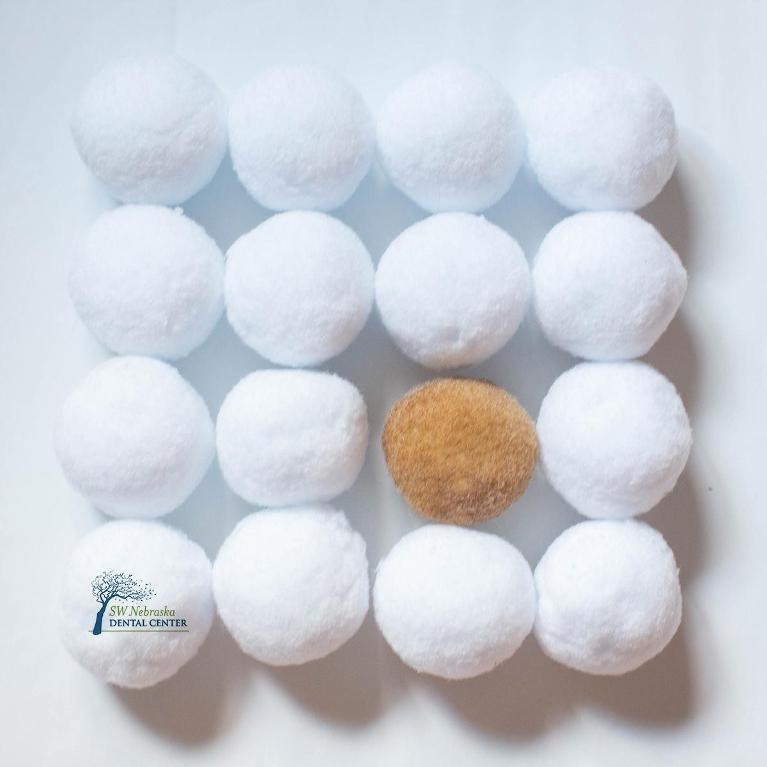 It’s January and winter white is on our minds… so let’s talk about white teeth. Having white teeth can make us feel more confident about our smiles. The same is largely true throughout human history. We’d like to start by saying that we do not recommend teeth whitening for kids under age 14. If your kids do have discoloration, make sure they’re brushing for a full two minutes twice a day, and visiting our office every six months.

Tooth discoloration is caused by many factors: aging, diet, foods that stain like coffee, soda, and wine, smoking, dental hygiene, medications, diseases, and genetic factors. People throughout history have gotten creative to achieve a whiter smile. Some Ancient Egyptians would try to whiten their teeth as a status symbol. They would mix ground pumice with white vinegar and rub it on their teeth with a frayed stick. Romans used human urine on their teeth to whiten them. The ammonia in the urine had a slight lightening effect on the teeth. We definitely do NOT recommend doing this! So gross!

In the 17th century when barbers performed most dental work, they would rough up the tooth surface with a file and then apply nitric acid to the teeth to whiten them. This process happens to also dramatically increase the likelihood of decay. But they didn’t know that at the time.

In the 19th century, dentists were experimenting treating gum disease with hydrogen peroxide. They discovered that applying hydrogen peroxide to gums also had a whitening effect on the teeth.

In the 1960s more experimentation was done with hydrogen peroxide and teeth. It was discovered that soaking extracted teeth in peroxide overnight whitened the teeth dramatically.

The first real tooth bleaching began in 1989. Dr. Haywood created a carbamide peroxide gel for his patients to put in night mouth guards. His patients were directed to sleep with the gel on for 10-14 nights to whiten their teeth. Today, tooth whitening is a big market and there are a plethora of products and treatments but they are not all effective. Whitening toothpastes and mouthwashes have not been proven effective. Some whitening toothpastes are extra abrasive and can actually harm your teeth.

Laser and LED light whitening are really just marketing gimmicks. Studies have been done where half the mouth was treated with bleach gel and light and the other half with only bleach. Both sides of the mouth whitened to the same degree so there was no benefit from utilizing the light.

We only recommend carbamide peroxide or hydrogen peroxide bleaching gels.

We offer two different method of whitening in our office, custom at home trays and in office bleaching.  If you have more questions, as always, give us a call!

View the ADA Accessibility Statement
Turn on ADA Views
Need to schedule an appointment? Call us at (308) 345-2273, email us at office@swnebraskadental.hush.com, or schedule online by clicking the "Schedule Online" button!
Contact Us Today
Give Us A Call
Southwest Nebraska Dental Center - (308) 345-2273
Schedule An Appointment
Expanded Details View
This Patient's Experience
Loading Testimonial...
Loading Case...